The unofficial on line newsletter of the West Somerset Railway

This page is part of the newsletter archive, photos of the year on the line can be seen on

Services continue with the "half term" services on 29 February plus 7 March between Minehead and Williton then services the full normal length start on 13 March on weekends for the rest of March, with the Spring Steam Gala on 25 to 28 March.  Train Timetables and other Services on www.wsr.org.uk has full details for the year.

This year is on Friday 26 March to Sunday 28 March with a preview day on Thursday 25 March.  The West Somerset Railway Spring Steam Gala has established itself as one of the heritage railway events of the year, the 2004 event promises to live up to the high quality successful Spring Galas over recent years. A four day feast of West Country steam!

The theme of the Railway’s 2004 Spring Steam Gala will be “The Big Four”, with a representative engine from each of the four main railway companies established at the 1923 Grouping.

It is also hoped that the Somerset & Dorset Railway Trust’s Peckett 0-4-0ST no 1788 "Kilmersdon" will be in steam and giving shunting demonstrations at Washford on all three days of the Gala.

Join us for 46 miles of Auto Train travel with small prairie 5542 just as it would have been in the 1930s or 40s. The rare chance to recreate the full Great Western Railway Auto Train experience over the entire length of the West Somerset Railway.

There should also be plenty of opportunities to visit the Loco Footplate and Auto Driving Cab at station stops.

Cost for the Full Day Trip is just £8

Hurry, space is limited to 60 places.

E-mail chairman5542ltd@aol.com to make a reservation.

You can join us at any time of year, if you would like to know more please write to: The Volunteer Co-ordinator, The Railway Station, Bishops Lydeard, Taunton, Somerset, TA4 3BX, visit www.wsra.org.uk, e-mail the West Somerset Railway Association or Tel: 01823 433856.

The visitors at present are:

5553 ex GW 4575 Class 2-6-2T from Waterman Railways - is currently at Tysley for maintenance but will return shortly.

6412 ex GW 0-6-0PT -back "home" for the early part of the year, including some of the February Half Term services and the Spring Steam Gala.

The creation of a small-boilered "Mogul", a locomotive designed by the Great Western Railway but never built, continues to make progress with entry into service planned this year.  Still no news on whether it will be 5193 or 9351 though!  Good progress is also being made with the S&D 2-8-0, 53808/88 which is also in the works at Minehead.  Work is also progressing on 34046 Braunton at the WSRA's works at Williton, her boiler has recently arrived back from Pridham's.

The sheds at both Minehead and Williton will be open during the Spring Steam Gala so you will be able to see progress on these locos for yourselves, details of opening times etc. on www.wsr.org.uk .

The frames of ex GWR 2-8-0 3850 have now been moved to Tysley to be reunited with the boiler, the plan is for 3850 to return to the WSR when restoration is completed.

Large prairie 4160 is now away at Buckfastleigh on the South Devon Railway for overhaul,  return to the WSR is expected to be in about 15 months.  7828 Odney Manor is at Minehead, she is at present up for sale by her owner and it is believed that the WSR has made an offer. Small prairie 4561 is on display in the Gauge Museum at Bishops Lydeard while she awaits her turn in Williton Works.

The other resident Hymek, D7018, is undergoing a major overhaul at Williton.

During the "close season" work is under way to provide a crossover in the bay platform at Minehead to enable locos to run round saving the need for shunt releasing at busy times.  The railway is also installing their own cabling for the Electric Key Token block between Minehead and Blue Anchor which will replace the BT lines used at present.  There will be an intermediate instrument at Dunster which will aid working in and out of the Permanent Way yard there.  Following on from this EKT block will replace Train Staff and Ticket on the Blue Anchor to Williton section.  There are photos of the progress on www.wsr.org.uk .

...are of this winter's activity on the West Somerset.  The first is of 7820 "Dinmore Manor" with Santa Special and Autotrailer 178 (propelled by 5542) at Crowcombe Heathfield. 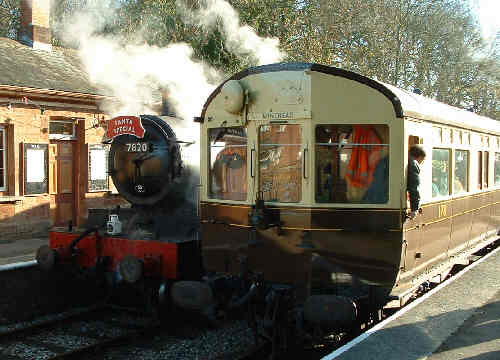 Next is 5542 with the autotrailer at Minehead, simmering in the December sunshine. 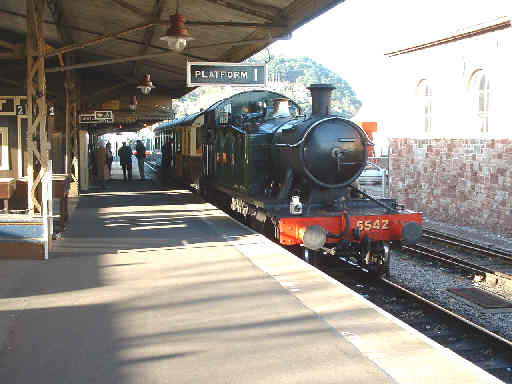 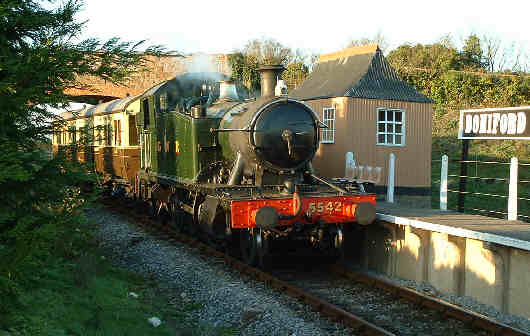 The season started in February with services between Minehead and Williton, on 15 February they were worked by the WSRA's ex GWR 0-60PT 6412 seen here running round at Williton passing the DEPG's depot with D9526, D6566 and the two Hymeks visible. 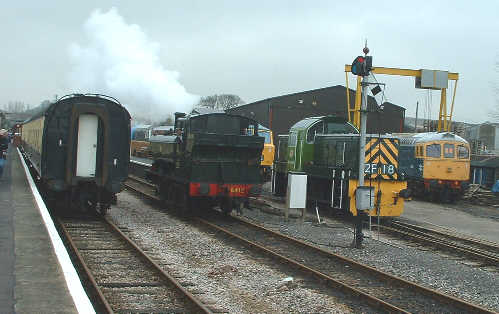 Another view of 6412 running round, this time with the WSRA's workshop in the background with the Lynton & Barnstaple's diesel loco, a steam roller and West Country Braunton's smokebox on view. 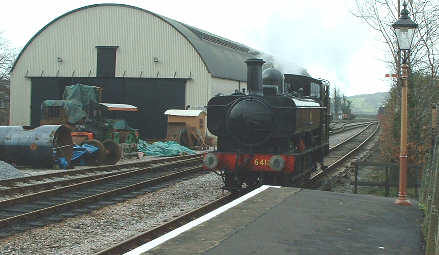 One of the main developments on the line over the 2004 "shut down" is the installation of a crossover in the bay platform at Minehead to enable locos to run round thus saving shunt release movements. Here the S&T gang are installing bases for the ground frame and rodding etc. 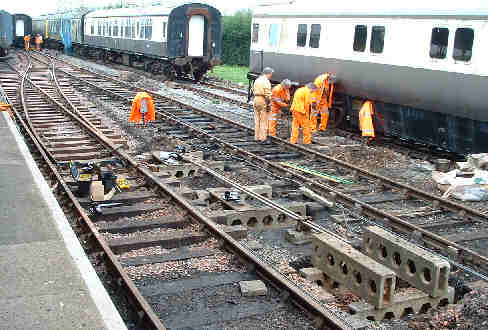 Note: you need to be connected to the Internet to view these photos.

In 2004, meetings will be held on the first MONDAY of the month (July & August excepted) at the usual venue – the Great Western Staff Association Club (at the north east corner of Taunton station) – starting at 7.45pm.

1 March: "The Road to the Isles" - Bernard Mills

The Bristol group meets on the last Tuesday of the month between September and April at the BAWA, Southmead Road, Filton, Bristol starting at 7.30pm for 7.45pm:-

The full programme for the year is now available on Stop Press, now you can plan ahead to get to all of the West Somerset's great events!

Groups on the line which would welcome support include:

Telephone the West Somerset Railway on 01643 704996 for contact details of these groups.

West Somerset Railway Association - the Association is the main support group on the line.

wizzer.me.uk is a new site about the West Somerset Railway by a fellow volunteer, Jon Tooke. He often finds odd places to take photos from and even odder things to take them of so check it as it grows!

© 2004 Steve Huddy.  This newsletter is independent of, and is not officially supported by, the West Somerset Railway plc or any of the affiliated organisations, unless specifically mentioned in the appropriate article. All information is believed correct but neither the publisher nor the Railway can be held responsible for any errors.